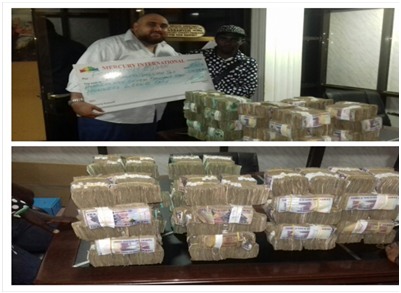 The number one Sports Betting and Lottery Company, Mercury International has on Monday 18th December, 2017 made another millionaire by the name of FOMONYUY EUGEN LUKONG who won a whopping amount of Two hundred million two hundred and Seven thousand Nine hundred Leones (Le 200, 207, 900).
As a tax compliance Company it has always been since its inception, Mercury International paid on behalf of Mr. Lukong the sum of Forty Eight Million Two hundred and Six thousand three hundred Leones (Le48, 206, 300).

This has further proved how credible and reliable Mercury is as a Company and how committed it is in making instant payments to its valuable winners.
Presenting the cash amount, the Operation Manager, Mercury International, Mr. Joseph Herb started by welcoming and congratulating the winner and his brother who accompanied him. He said Mr. Lukong is a very lucky man; saying that he is the highest individual winner in 2017.

"You are the highest individual winner in 2017, we've got individual winners during the course of the year but you have surpassed that today, we are looking forward to more of such big winnings from our esteemed customers". He stated "I encourage you to take very good care of this life changing amount, such an amount is not easy to come by; and winning it should be a blessing and not a curse. This is a clear manifestation that we are credible, reliable and dependable and as a Company". He Concluded.

Mr. Lukong staked Le5, 000 only and won the above whopping amount. He said he has been a resident in Freetown since the early 90's and has been a constant Mercury customer since 2011.
"This is not my first winning; I have won (Le1.8 million) in 2014 by staking bet on football. I have won three (3) numbers from the 4/50 jackpot product and last year I also won (Le7, 000,000). I stake my bet on nine (9) teams that led to this winning, the 4/50 Jackpot and football are my favourite Mercury products. I know am not perfect but being a sport follower for almost all my help me to determine the strengths of teams I should stake my bets on". He Stated.

"My motivation for Mercury International came from the very first day I played Mercury because I won that ticket. I'm a specialist in determining the strength of teams; I follow their injury list etc which helps me in staking my bets". He Surmised

When asked what he will do with such a life changing amount, he replied that "I have an established business, I intent broadening the capacity of my business and I pray Mercury International will remain forever and I will continue to play Mercury forever". He affirmed.

He concluded by admonishing the public especially those who have misconceptions about Mercury that Mercury is real and urge them to be part of Mercury as they never know what tomorrow will bring. He furthered that the youths should stop risking their lives going to Libya to do "Temple Run" but to remain here and rely on Mercury for prosperity