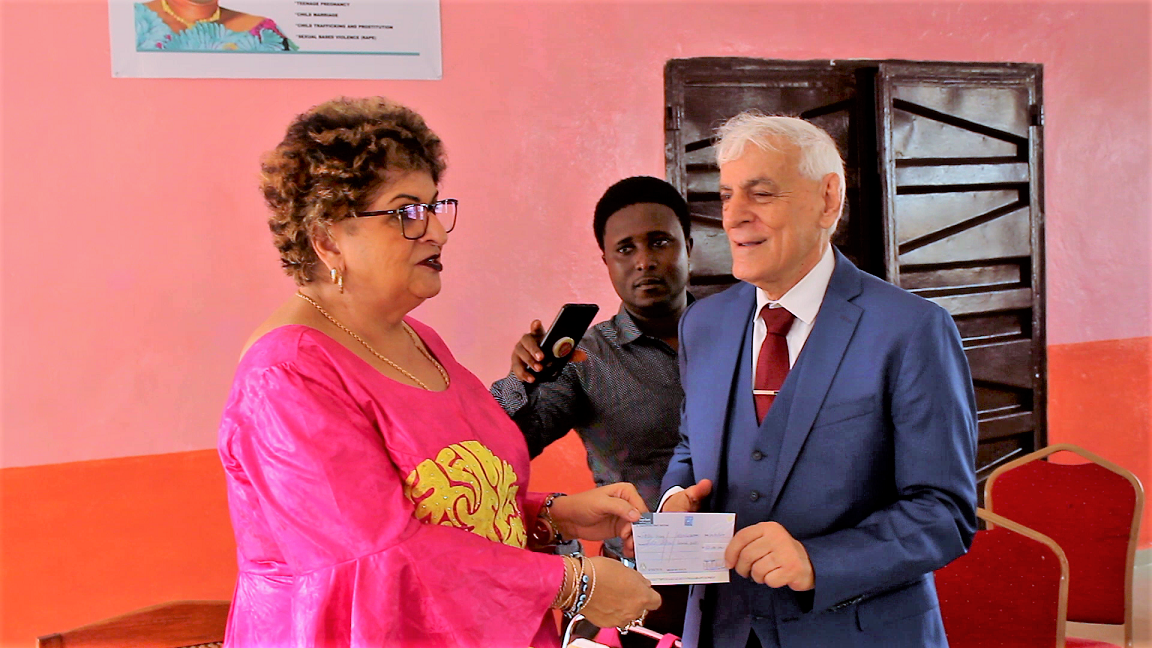 Presenting the cheque, Chairman Board of Directors Mercury International Company SL. Ltd, who also doubles as Chairman of the Company's Charitable Foundation, Samir Hassanyeh, said their kind gesture as a company is to support both formal and informal education, adding that it will help ease the pressure on the Association and allow them to secure the materials needed to maintain the expected standard of the Vocational center.

"We are pleased to support such a laudable initiative by the Sierra Leone Police Wives Association as a cooperate institution," Samir Hassanyeh said, pointing out that the company's doors are always open to support education as a developmental activity, which is a top priority on the agenda of our cooperate social responsibilities .

Receiving the cheque at the newly constructed hall, Kingtom, Olga Maria Moigbe, President of the Association, on behalf of her colleagues, expressed delight for such huge support from, unarguably, the country’s  lead Sports Betting and Lottery Company, citing that, their request to support educational project did not fall in deaf ears.

She said the support from Mercury International is very timely for the first set of wives and female children of junior ranked police officers in society, who can be able to learn how to use a computer, thereby developing the carrier part as meaningful citizens.

Mrs Moigbe said the Technical and Vocational training Center would give women the chance to learn skills that will reduce their dependence on the salaries of their police husbands stressing that the motivation for the construction of the new building was to empower the less-privileged wives and female children of police officers.

She said the center does not only solve the economic needs, but will also help with the social needs of the association, adding that the goal is to offer adult literacy and vocational training classes to empower them and eventually give them adequate skills to be financially independent.

The Police Wives Association Technical and Vocational training Center was open by President Julius Maada Bio in November and it is the first of its kind ever and was designed to ensure wives of police personnel are self-reliant.

The project is the brainchild of Olga Maria Moigbe, wife of the Inspector General of Police Richard Moigbeh.

The Centre, according to Mrs. Moigbeh, also has the support of the First Lady of the Republic of Sierra Leone. Mrs. Fatima Bio, who joined her husband to inaugurate the project.